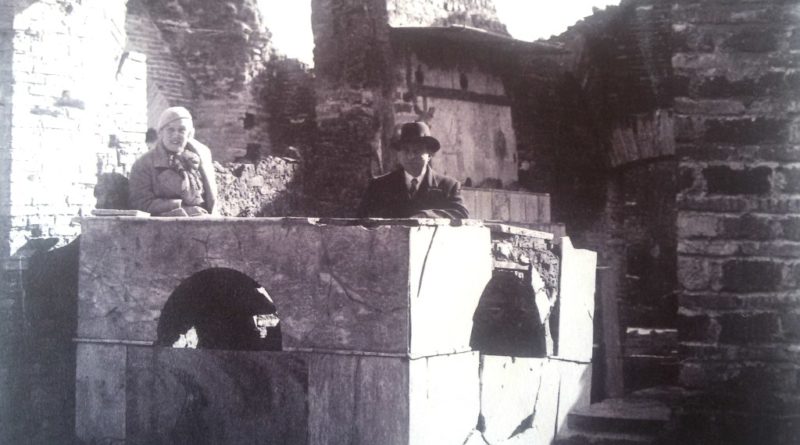 Raissa Calza is an important figure in the excavations of Ostia Antica. On the occasion of the 40th anniversary of her death, the Archaeological Park of Ostia Antica organized at the beginning of December a conference in memory of this extraordinary archeologist of Russian Ukrainian origin.

Her Life in Russia

Raissa Samuilovna Gurevich (Раиса Самуиловна Гуревич) was born on December the 15th, 1894 in Odessa. She was the youngest of five children of a rich Jewish family of landowners. Her father Samuil (1863-1939) and her mother Berta Herzenstein (Берта Герзенштейн, 1862-1919) owned two large estates in Poland, near Brest-Litovsk, and in Finland, in Tervus, on Lake Ladoga. They had an anti-Czarist attitude and were in favour of Aleksandr Kerensky’s democratic revolution of March 1917 (Алекса́ндр Фёдорович Ке́ренский, 1881-1970).

Raissa lived in Saint Petersburg until 1918, where she studied foreign languages, visited theatres, went to concerts, opera and travels a lot. During her stay in San Remo she met the Russian philosopher Georgi Plekhanov (Гео́ргий Валенти́нович Плеха́нов, 1856-1918), who gave her history lessons.

Her father was a dance lover, so encouraged her to become a dancer. By working on stage, she met her first husband Georgy Krol (Георгий Александрович Кроль, 1893-1932), a theatre and movie director. He was a disciple of the famous Russian actor and theatre director of German origin Vsevolod Meyerhold (Все́волод Эми́льевич Мейерхо́льд, his real name was Karl Kasimir Theodor Meierhold, 1874-1940). Kroll was later known for the film Blood siblings (Родной брат), directed by Kroll 1928. 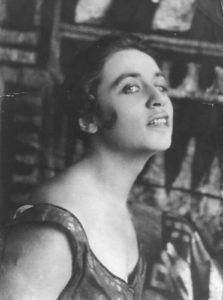 In 1919 Raissa was forced to emigrate with her husband, because of the revolution that broke out in Russia. In 1920 the couple joined Raissa’s father Samuil and her uncle Lev in Turin, whose families were guests of Riccardo Gualino, one of their business partners in Italy. In July 1920 Raissa and Georgy lived in Hotel Flora in Roma, where they made acquittance with Olga Resnevich Signorelli (1883-1973), thanks to the Russian painter Mikhail Larionov (Михаи́л Фёдорович Ларио́нов, 1881-1964). Singorelli’s home was one of the most lively and refined centres of artistic and cultural life in the Italian capital. From 1921 to 1923 the couple worked in Berlin, where Kroll shot few movies and Raissa worked as an actress.

In 1923 the Krols decided to come back to Rome. After a short trip to Amalfi, Capri, Positano and Sorrento, Raissa had the chance to meet the famous painter Giorgio De Chirico on the occasion of the staging of Histoire du soldat  by Igor Stravinsky (И́горь Фёдорович Страви́нский, 1882-1971), at the Teatro degli Undici (Palazzo Odescalchi); Raissa was chosen as prima ballerina. The theatre drama was staged in collaboration with the New Music Corporation founded by Alfredo Casella, Gian Francesco Malipiero and Mario Labroca. The director was Hermann Scherchen (1891-1966); even Stravinsky went to see the show. 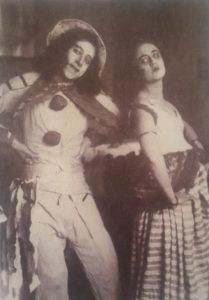 Her relationship with De Chirico

In that year, Giorgio De Chirico and his younger brother Andrea Francesco, whose pseudonym was Alberto Savino, were staging the mimic tragedy The death of Niobe for the Teatro degli Indipendenti (Theatre of the Indipendents), known at that time for the Pirandellian stagings by Anton Giulio Bragaglia. The two brothers offered Raissa the main role of Niobe. She performed in Italy under the pseudonym of Raissa Lork. The music for the show was by Alberto Savino, while the sets were by Georgij Krol and the costumes by Giorgio De Chirico. 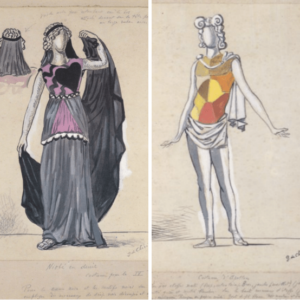 After a short stay in Paris, at the end of August 1924, her husband received an interesting proposal to go on tour in Italy with the troupe “Golden Cockerel” (Le Coq d’or, Золотой Петушок), a cabaret theatre founded by Anatoly Dolinov (Анатолий Долинов, his real name was Анатолий Котляр, 1869-1919). The Krols spent three months (from November 1924 to January 1925) travelling in Italy and North Africa (Bologna, Ancona, Florence, Naples, Tunisia)

In December 1925 Raissa broke up with Krol and left for Paris with De Chirico. Soon, the Italian artist became her second husband and painted Raissa in some famous portraits. She lived and worked with him in France and Italy. During her stay in Paris, she studied archeology under Charles Picard’s wing, who was also director of the École Française in Athens. Raissa never got her degree, though.

In April 1929 she followed De Chirico to the south of France (Monte Carlo and Marseille). The painter agreed to collaborate with Djagilev’s Ballets Russes (Russian Ballets – Серге́й Па́влович Дя́гилев, 1872-1929), preparing costumes and sets for Bal. The choreography of the show was by George Balanchine (born Georgiy Melitonovich Balanchivadze – Гео́ргий Мелито́нович Баланчива́дзе, 1904-1983) the music by Vittorio Rieti (1898-1994). In 1930, Raissa second marriage was also on the rocks, because De Chirico abandoned her, after falling in love with Isabel Far, who very soon became his second wife. During their troubled relationship, the painter portrayed his wife in various paintings. 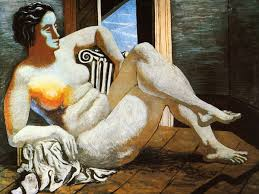 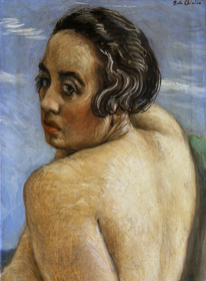 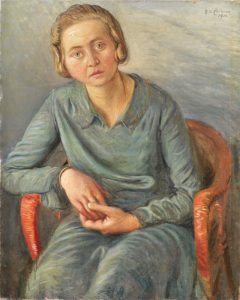 Raissa divorced De Chirico in 1931 and returned to Rome in 1932, trying to overcome the pain of her heartbreak. She devoted herself entirely to archaeological excavations. Having interrupted her studies in archaeology in Paris, she could not obtain assignments as an archaeologist at any Italian institution, so in 1937-38 she arrived as a photographer and secretary at the Superintendence of Ostia, where the great excavation campaign of the years 1938-42, directed by Guido Calza (1888-1946), was underway in view of the Universal Exhibition, on the occasion of the twentieth anniversary of Fascism.

From 1937 she was the assistant of Guido Calza, who let her work even during the racial laws. Between the two archaeologists a strong emotional bond was established, as well as mutual esteem, and the two of them married in 1945, at the end of the war. In less than forty years the Russian scholar edited numerous publications on classical Rome: catalogues, archaeological guides and essays, paying particular attention to iconography. 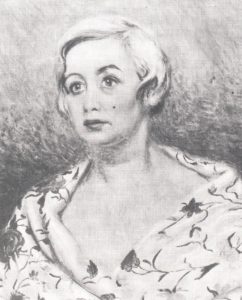 Raissa Calza knew so well the archaeological site of Ostia Antica, that she was the tour guide of the princesses Christina of the Netherlands twice (in 1956 and 1961). She acquired a vast knowledge of the material of the ancient city, thanks to which she participated in the setting up of the Ostiense Museum, personally taking care of the selection of sculptures and paintings, their restoration, and also the illustration of the guide. She took care of this museum in 1947, continuing the work of her husband who had died the previous year.

In 1963, she was invited by the Pope to a private audience. For her contribution to Italian culture, in 1967 she was awarded the Gold Medal of the Institute of Art and Culture and the Diploma of Merit of the Italian culture.

Esteemed and appreciated by illustrious colleagues, such as Ranuccio Bianchi Bandinelli, Sabatino Moscati and Giovanni Becatti, Raissa had a certain predilection for iconography and portraiture. Important institutions and collectors often consulted her for expert reports. Raissa contributed to the prestigious Encyclopaedia of Ancient, Classical and Oriental Art directed by Bianchi Bandinelli, she was also the first scientific collaborator of the Photo Library Union at the American Academy, as well as a member of the German Institute in Rome and a corresponding member of the Pontifical Roman Academy of Archaeology. 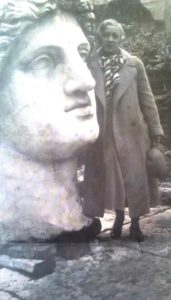 The last years of her life

At a late age she was struck by a paralysis that forced her to remain still. She could no longer write, and read with difficulty. She was hospitalized in the Retirement Home of Monte Cucco. She decided to donate her personal library (1,275 works and hundreds of articles) to the Faculty of Literature and Philosophy of the University of Siena (the present Humanities Library of Siena). This fond consists of letters, postcards, telegrams, dairies, materials regarding the history of Gourevitch, Tumarkin and Frenkley families. A large part of the documents regards the excavations of Ostia Antica. 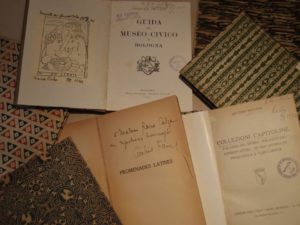 The Archives Section of the Humanitarian Library with the Fond of Raissa Gourevich-Krol-De Chirico-Calza was established in 1995, thanks to a donation by Franco Fortini (1917-1994), who taught Liturgy at the Faculty of Literature and Philosophy of the University of Siena. This section is formed by eighteen personal collections, including that of Raisa Calza. The ex-libris painted for her by the artist Giorgio De Chirico became the library’s logo. 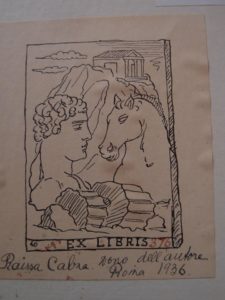 Raissa Calza passed away on January 24, 1979, in the nursing home of the Sisters of Charity in Rome. She was buried in Ostia, in the cemetery of St. Ercolano, next to her husband Guido Calza. 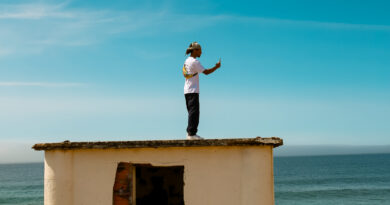 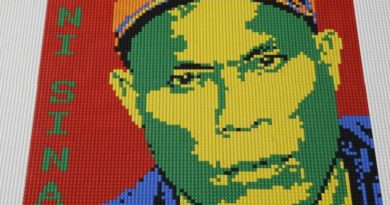 Ai Did It Again: Talking Legos To Convey His Democratic Message 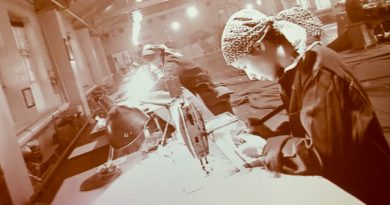